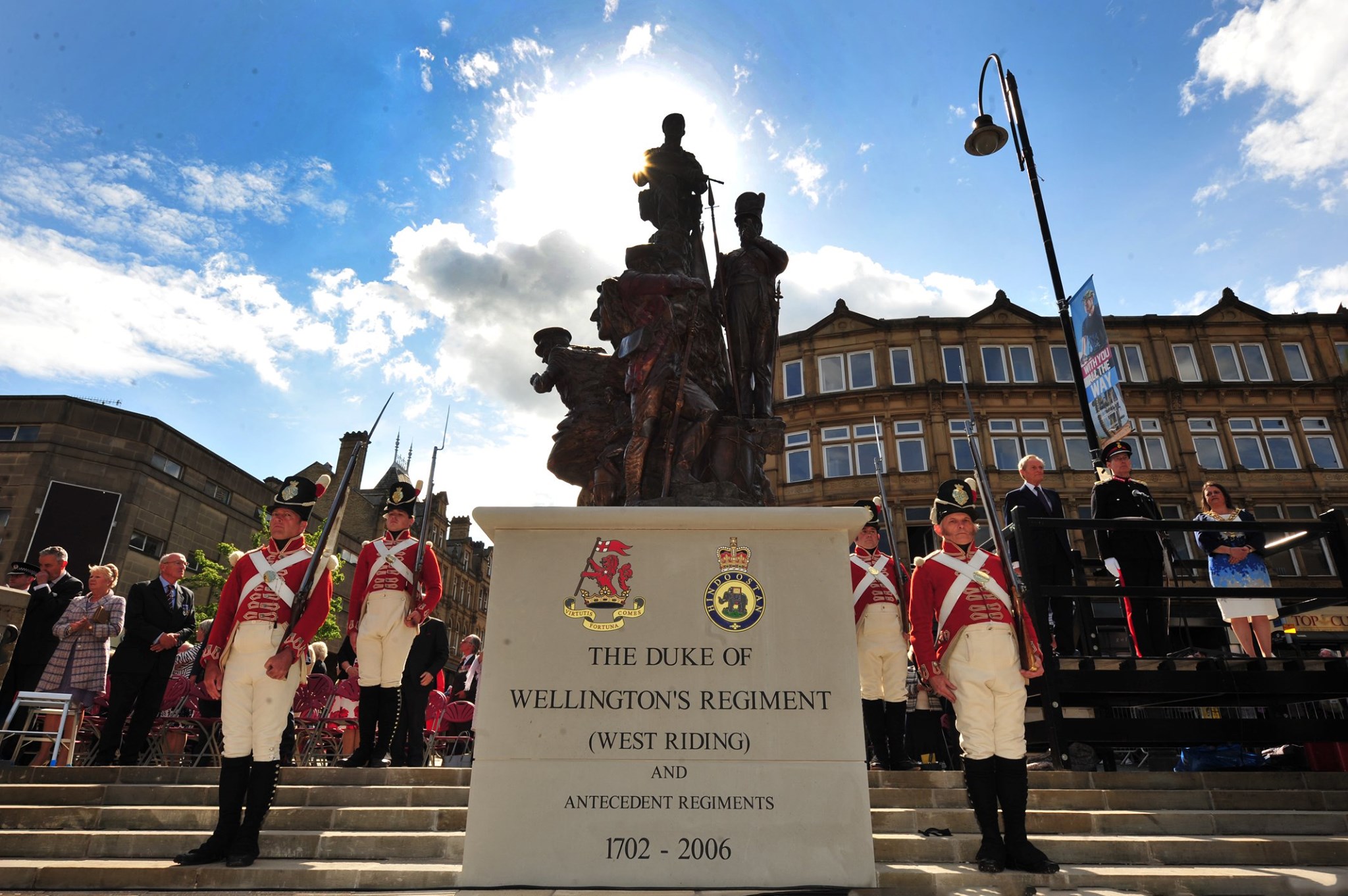 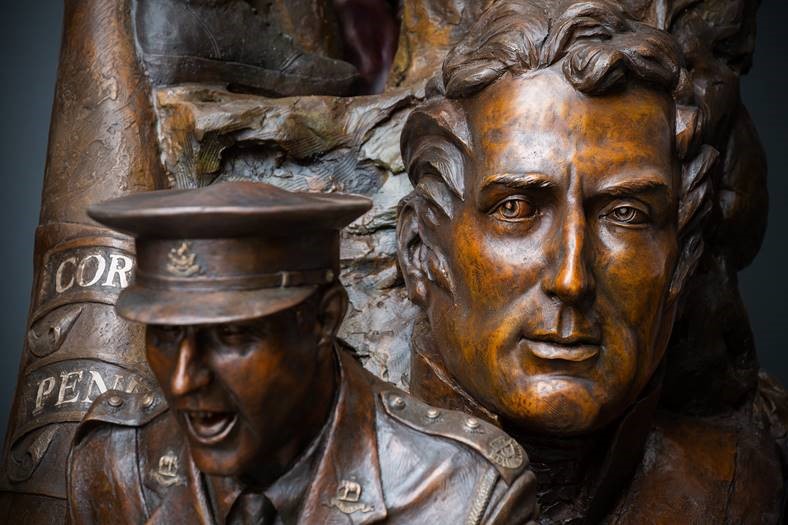 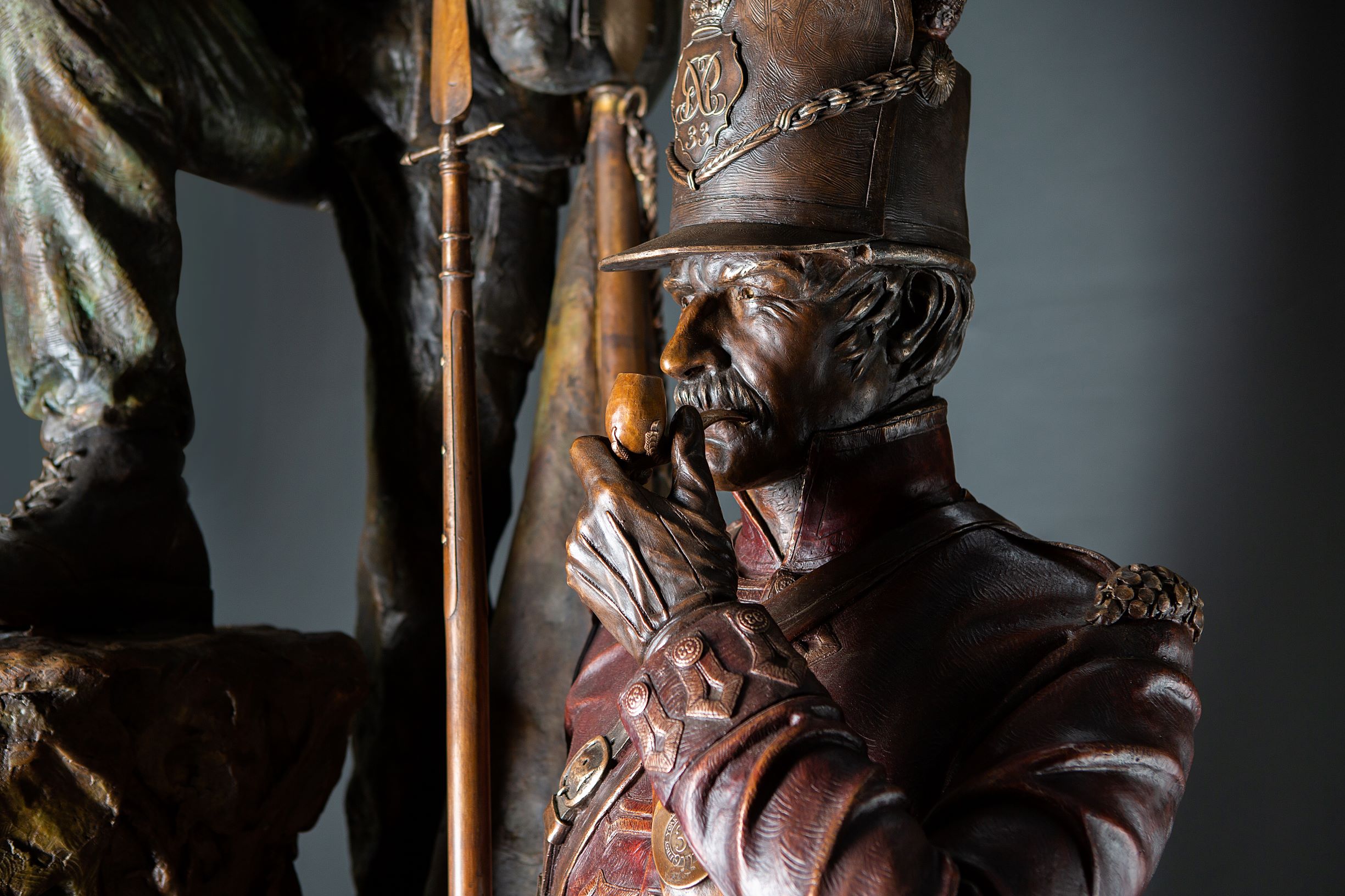 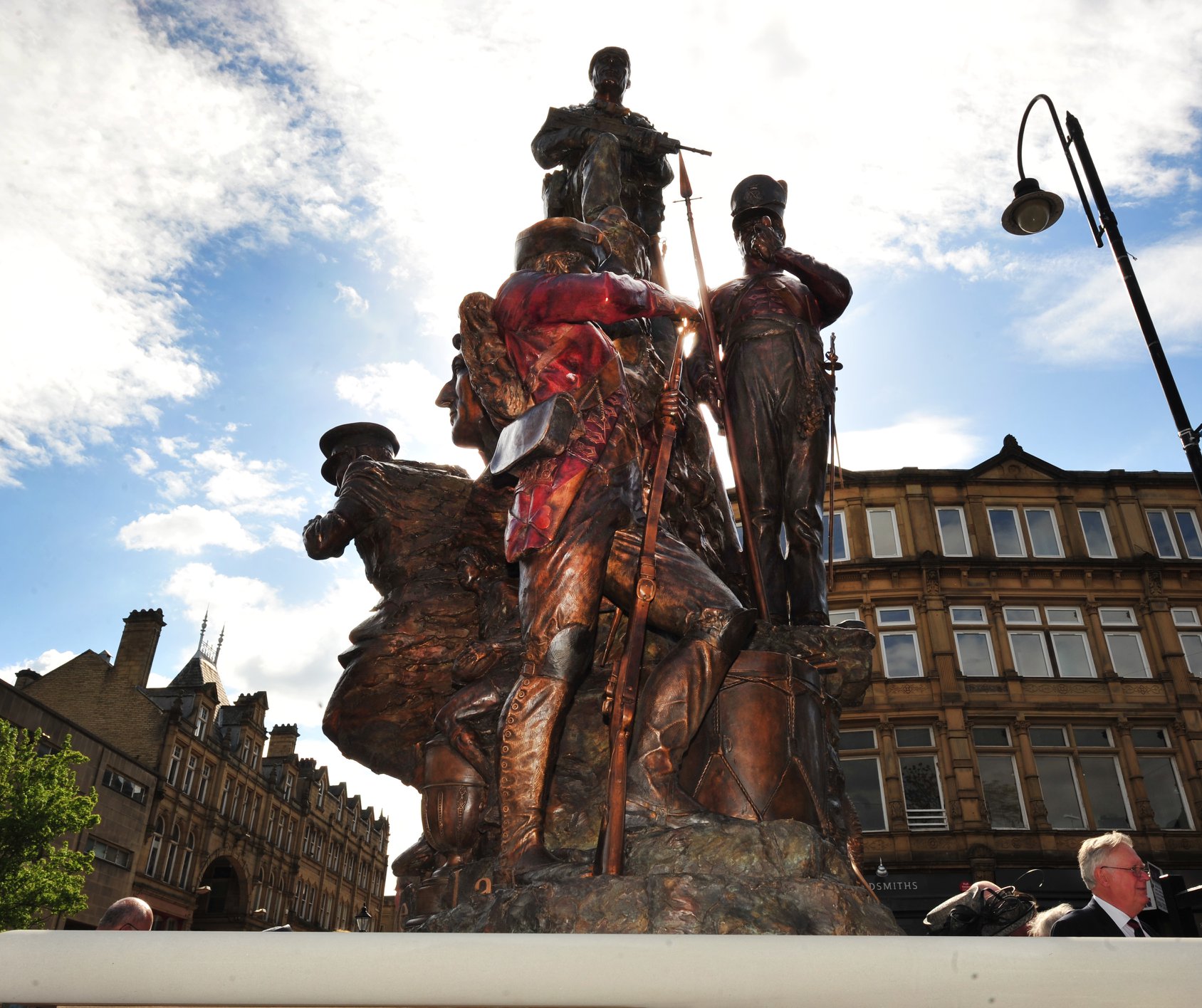 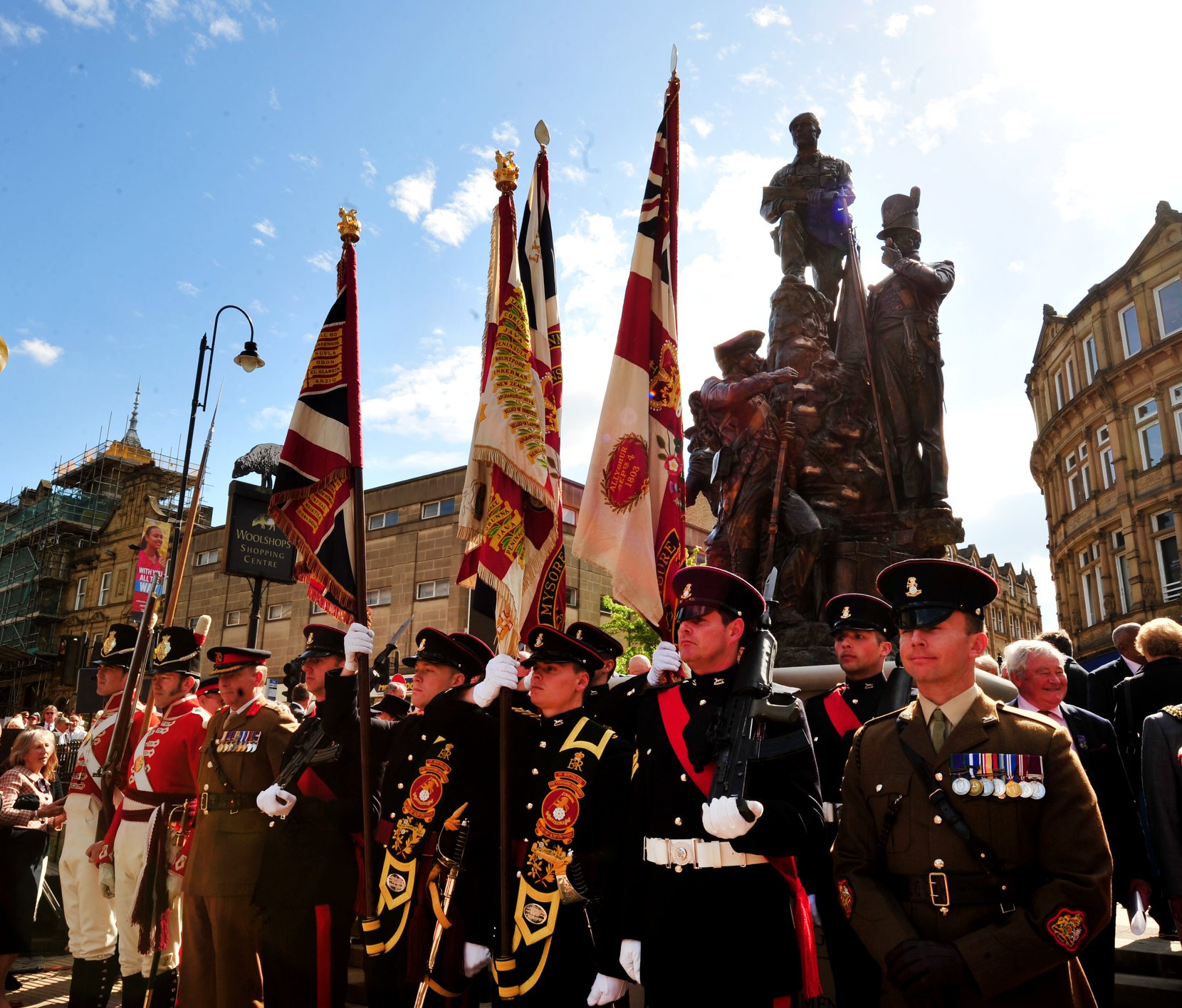 The Duke of Wellington’s Regiment Memorial

This powerful and arresting sculpture was commissioned by The Duke of Wellington’s Regiment to commemorate over 300 years of military history. Founded in 1702, the Regiment has featured prominently in British Military history ever since. The brief, from the Commissioning Committee, was to create a distinctive memorial that represented the Regiment’s connection to Halifax and Yorkshire and that would take centre stage on the brow of the High Street in the centre of the town, home to the Regiment.

An initial suite of designs was presented to the Committee, illustrating the vision for a sculpture that would bring alive the stories of all those touched by the Regiment through the years. From the outset, sculptor Andrew Sinclair MRSS envisioned a piece that would commemorate all those lives affected by the work of the Regiment – the soldiers, the families and the community. A trade-mark feature of Andrew’s work is his ability to not just replicate the image of a person or people but to bring them to life and tell their stories through visual narrative and unparalleled sculptural techniques.

The presented concept featured a truly three-dimensional work, to be viewed from every angle, each side revealing a different and unique part of the story. There is no front or back to the finished sculpture, simply one complete story told in the round.

At its heart the sculpture features four life-size soldiers. Each one represents a moment in time. The first historical figure, a soldier from the 33rd Regiment of Foot at the time of the War of Independence, loads his musket whilst looking towards a Sergeant from 1815, at the Battle of Waterloo. From the edifice’s base an Officer from WW1 is seen emerging, with his Webley revolver in his right hand, he is ready to blow the whistle in his left to lead his men over the top of the trenches. Standing above these three, as if safeguarding the Regiment’s place in time, is a soldier from the 20th Century Afghanistan campaign, bringing the story up-to-date.

In and around these key figures are mini vignettes, snapshots of life, all connected to the Regiment: A mother and her two children from WW2 huddle together. The mother and son hold a flagstaff, whilst the daughter cuddles a soft toy. In the background are the rich green Yorkshire Dales. This family are a sculptural metaphor for the strong family connections within the Regiment. Tucked under the crag beneath the Napoleonic Sergeant is a bas-relief of an Indian elephant ridden by his mahout in front of the howdah. The elephant became the mascot of the Dukes Regiment following Indian campaigns led by Arthur Wellesley. The inclusion of rugby player Graydon Williams, represents the importance of rugby to the Regiment and their pride in winning the Army Rugby Cup 13 times. On the side of the rock edifice are 10 name plaques honouring the Regiment’s members who were awarded the Victoria Cross. All these individual narratives are brought to life using the most incredible levels of detail. Many hours of research went into ensuring that each element was as historically exact as possible.

Looking out over all these scenes is the 1st Duke of Wellington himself. His portrait is an accurately scaled sculpture whose measurements were taken from the original marble sculpture by Joseph Nollekens, at the Duke of Wellington’s London residence, Apsley House. He seems to study all below him with a sense of unwavering pride.

See The Project At Maquette Stage

Created, moulded and cast as individual segments, the final 16 foot high sculpture was transported from its place of creation in the Devon countryside to its new home in the heart of Halifax town centre. The unveiling ceremony was a memorable and emotional opportunity for all those linked to the Regiment.

This was a project that demanded unprecedented imagination, skill and organisation. From the very start Andrew communicated closely with the Commissioning Committee to share the many processes a commissioned sculpture of this scale must go through.

The Memorial is now a popular visitor attraction and is the chosen site for the annual Armistice Day remembrance. The local community has taken the Memorial to their hearts. Interest has been such that local schools visit the Memorial and the Regimental Museum in order to learn about its history.

The Monument has become a memorial to the many and great sacrifices made by the Regiment and a lasting legacy for their families to cherish for years to come.