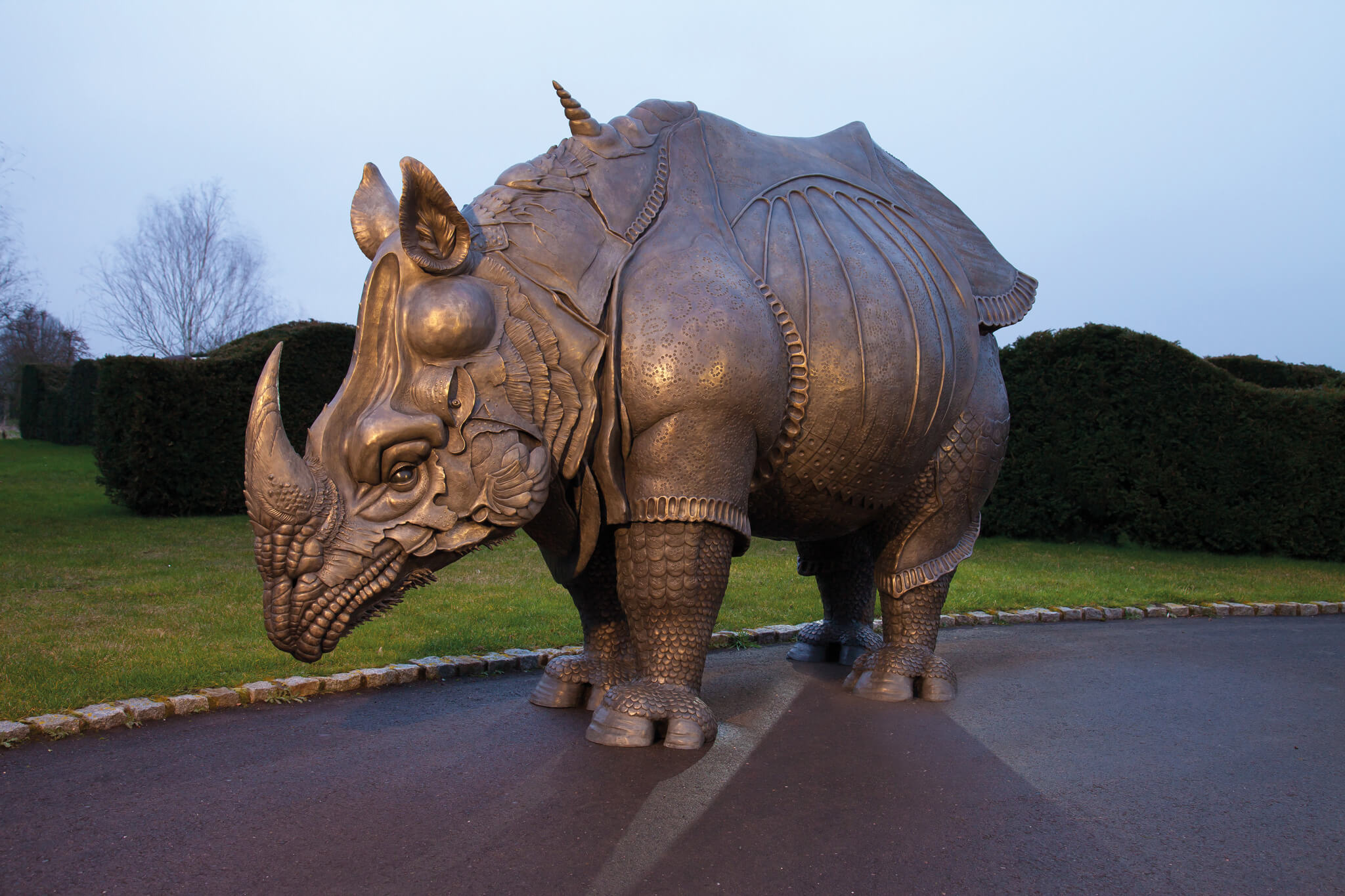 "Today was one of the best days of my life. Nothing of any importance occurred."

Over a number of years Andrew Sinclair was commissioned to create sculptures for the late poet and publisher Felix Dennis. Felix was a passionate patron of the arts, an incredibly dynamic and powerful man, who heavily influenced both the publishing and art worlds. His generosity to artists and craftspeople was unparalleled. Andrew Sinclair became one of his favourite sculptors and was commissioned by Felix to create 12 magnificent sculptures. Many of these were designed to adorn his stunning private gardens, ‘The Garden of Heroes and Villains’, in Dorsington, Warwickshire. But Andrew also created a number of very personal family sculptures including portraits of his beloved mother Dorothy, his family friend Robert Woof, his own bust and his favourite dog, Rex. Andrew was also honoured to be asked by Felix, prior to his death, to design and sculpt life and a quarter-sized bronze figurative memorial sculptures which are now located in the Shard Garden at Dorsington, as well as at his graveside in the Heart of England Forest.

Amongst the many commissions undertaken by Andrew the life-size bronze sculptures of Durer’s Rhino, the Minotaur and King Kong are notably the most impressive and were amongst Felix’s favourite pieces. They are also prime examples of Andrew’s own sculptural form of narrative realism, a style of sculpture that brings the character and life of his subjects to life in a way that is beyond mere representative figurative sculpture. 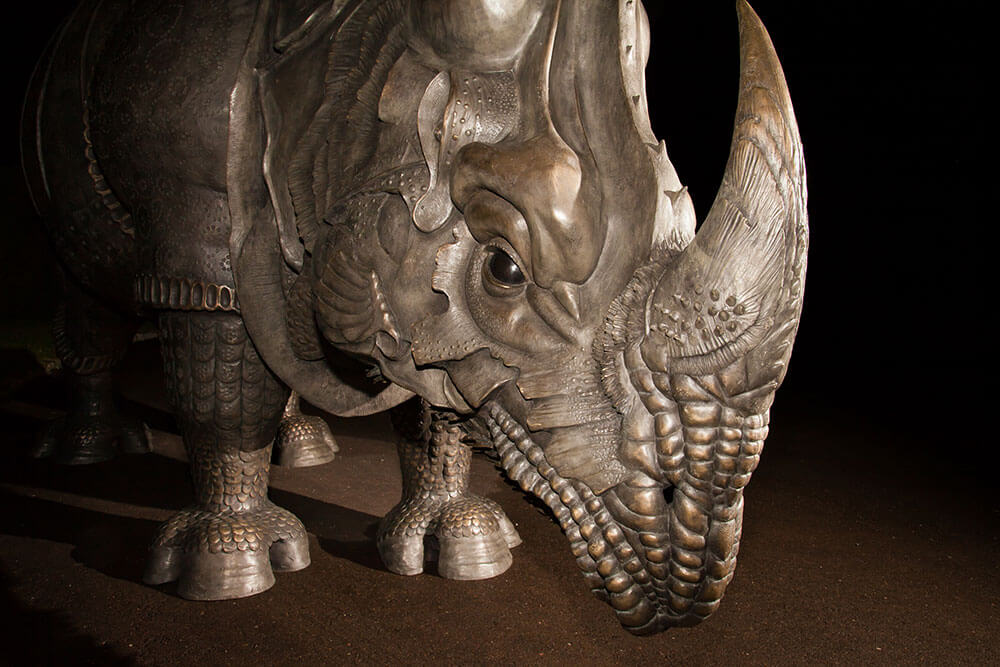 This life-size bronze is a sculptural interpretation of Albrecht Durer’s famous 16th century wood block print of an Asian rhinoceros. It is thought to be the first ever three-dimensional rendering of Durer’s famous Rhino. Now located in Felix’s ‘The Garden of Heroes and Villains’, it creates an imposing sight as it looms from amongst the vegetation that frames it. Weighing in at over one and a half tons, the sculpture is a stunning rendering of the rhinoceros’ life-like flesh and horns. 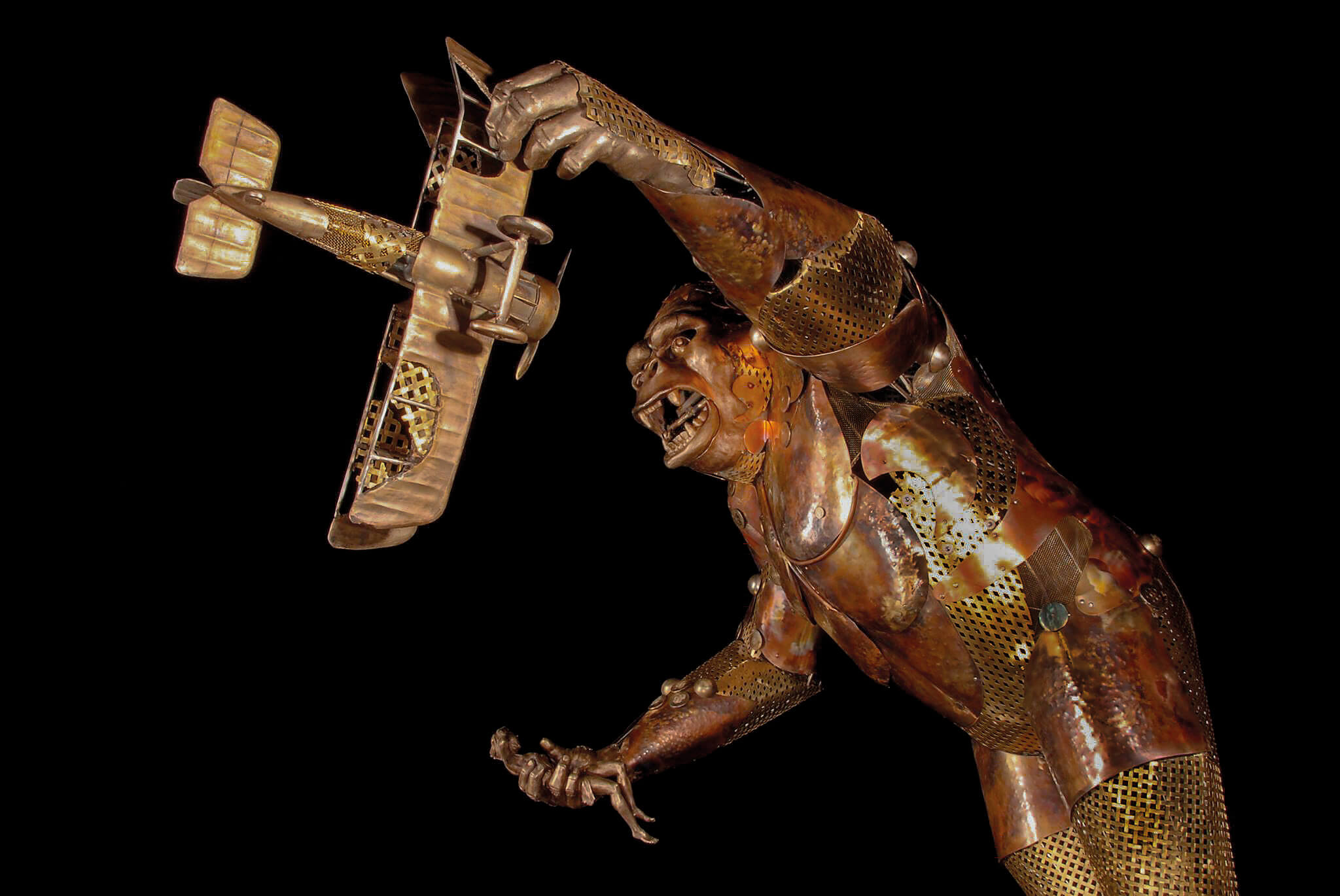 One of Andrew’s most fascinating commissions was Felix Dennis’ request to recreate the iconic cinematic figure of King Kong in a very particular style in fabricated repousée copper, brass & bronze sheet, stainless steel and cast bronze. The head, hands, feet, small figure of Fay Wray and the biplane were all sculpted in clay, moulded and then cast in bronze by Andrew at his studio. Felix’s initial reaction to Kong’s definitely angry face was to ask for it to be softened. Andrew’s ingenious solution was to turn the whole sculpture into an automaton so that, when a hidden lever in his leg is pulled, Kong’s facial expression changes. His eyebrows move up and down, the eyes move from side to side and the mouth opens and closes giving six different expressions. Felix was delighted. King Kong is now located by a lily pond, appearing from behind huge subtropical planting at ‘The Garden of Heroes and Villains’. 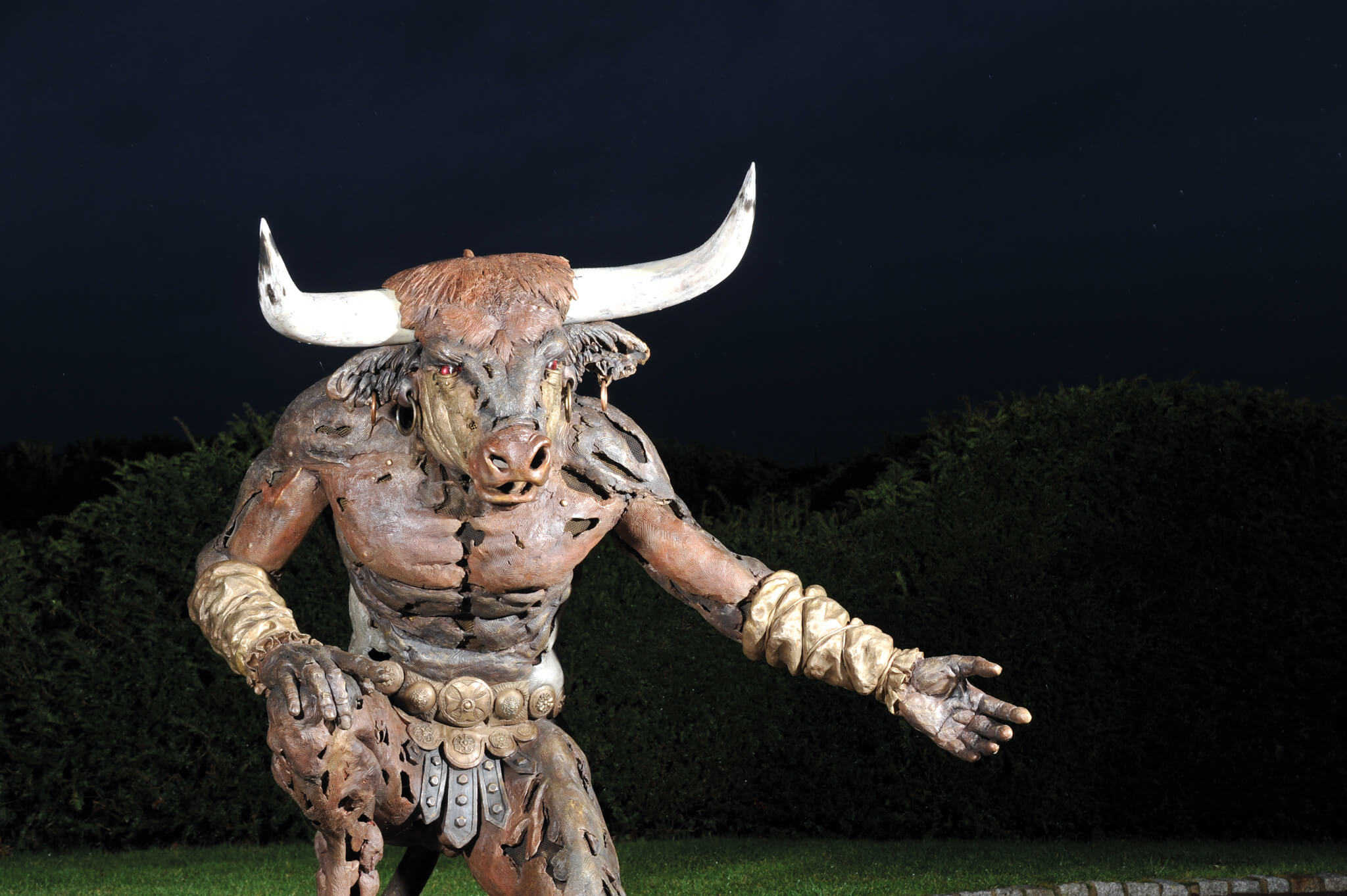 Andrew’s life-sized coloured bronze Minotaur welcomes guests with arm outstretched at the entrance of the maze at ‘The Garden of Heroes and Villains’. The Minotaur’s eyes glow red to startle and captivate observers thanks to the unusual placing of a prism within the bronze head that reflects the sunlight. The sculptor’s clay strokes are loosely applied, creating a lively surface effect in the bronze – the gaps between are lined with brass mesh in similar style to the King Kong sculpture. 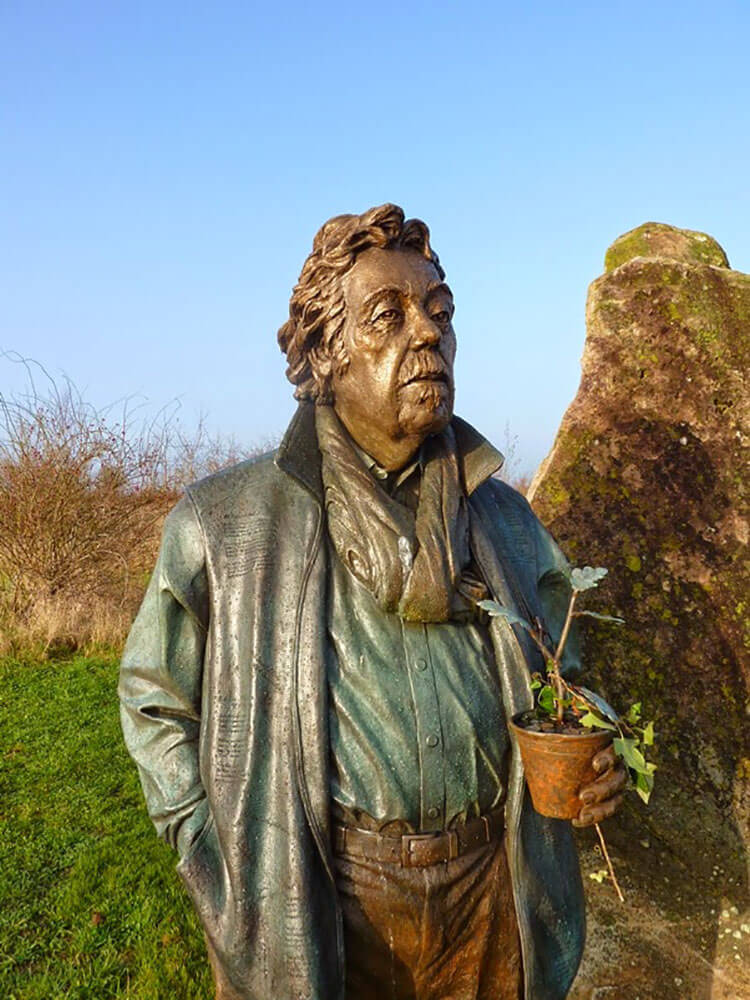 It was a great honour for Andrew that, towards the end of his last poetry recital tour, Felix awarded him with this final sculpture commission – his memorial figurative sculptures. Having just completed planting his one millionth tree in the Heart of England Forest, it seemed appropriate to depict Felix proudly holding the millionth oak seedling in a pot. In Andrew’s trademark narrative realism style he is dressed casually, with scarf around his neck and wearing a fleece gilet. Symbolically, a selection of Felix’s poems are inscribed on the gilet, making the sculpture a poignant recognition of his literary achievements. The actor/author Stephen Fry is quoted as describing Felix Dennis as the most significant contemporary poet of the 20th & 21st centuries. The sculptures are placed in the centre of the Shard Garden within ‘The Garden of Heroes and Villains’ and at his graveside in the Heart of England Forest.