'The Wonder of The Seas' Cruise Liner

"Sometimes it's fantastic to just let your imagination take flight and see where it goes."

Over the years Andrew has been asked to undertake some fascinating projects. From the weird to the wonderful and everything in between, he has created fire-breathing dragons, giant snails, cartoon birds, trapeze artists, towering figures, abstract ‘Hepworth-esque’ shapes, divers, swimmers, Venetian masks, and many, many more. Maybe there hasn’t been a project as much fun to create as these three silver-suited astronauts clutching metallic balloons.

Commissions like these can come from a variety of organisations looking to make a visual statement – from cruise liners to commercial property developers. This recent commission was to create three astronauts for the cruise-ship ‘The Wonder of The Seas’, to be installed on a promenade, looking down into a restaurant, and floating from a climbing wall (as you do). The brief was to create fun astronaut figures holding faceted heart balloons and Andrew’s final design is a captivating interpretation. Not quite ‘cartoon’ in style, but also not completely realistic, these astronaut figures are amusing and fascinating. The ‘floating’ astronaut appears to truly defy gravity.

Often these commissions have an extremely tight deadline, allowing a very small window of opportunity in which to sculpt, mould, cast and patinate the sculptures. Andrew’s professionalism and years of expertise mean that these industries know they can rely on him to deliver superb sculptures, on time, every time. This job was no exception and involved clever engineering and practical expertise to ensure that, not only were the sculpture designs brilliant, but that they would be strong, stable and withstand the vagaries of extreme weather conditions, as they were to be installed outside, in the elements, on board one of the biggest cruise-liners in the world.

As is usual when creating a life-size figure, Andrew made welded steel armatures and bulked out the bodies with polystyrene first before applying the clay. To create the helmets, he utilised his cabinet-making skills to build the first beautifully rounded helmet and visor – technically challenging but so much better than trying to sculpt something perfectly round in clay! This prototype was then moulded and cast three times, one helmet for each astronaut. Similarly, producing multiple moonboots was extremely effective and allowed Andrew more time to sculpt the astronauts in clay. Making the faceted hearts was another challenge which involved making the geometric pattern, applying it to a hand carved polystyrene faceted shape, then moulding and casting it 6 times to create three 3D resin balloons. Each astronaut sculpture was moulded, then cast in resin (with fixings in place) before finishing the seams. Once complete, the finishing touch was to dispatch them to our colleagues at a professional painting company for them to spray the astronauts silver and white, the visors gold and the balloons candy colours of red, fuchsia and blue.

Making a truly impactful visual statement takes vision, imagination and great skill, and these three astronauts are certainly out of this world. 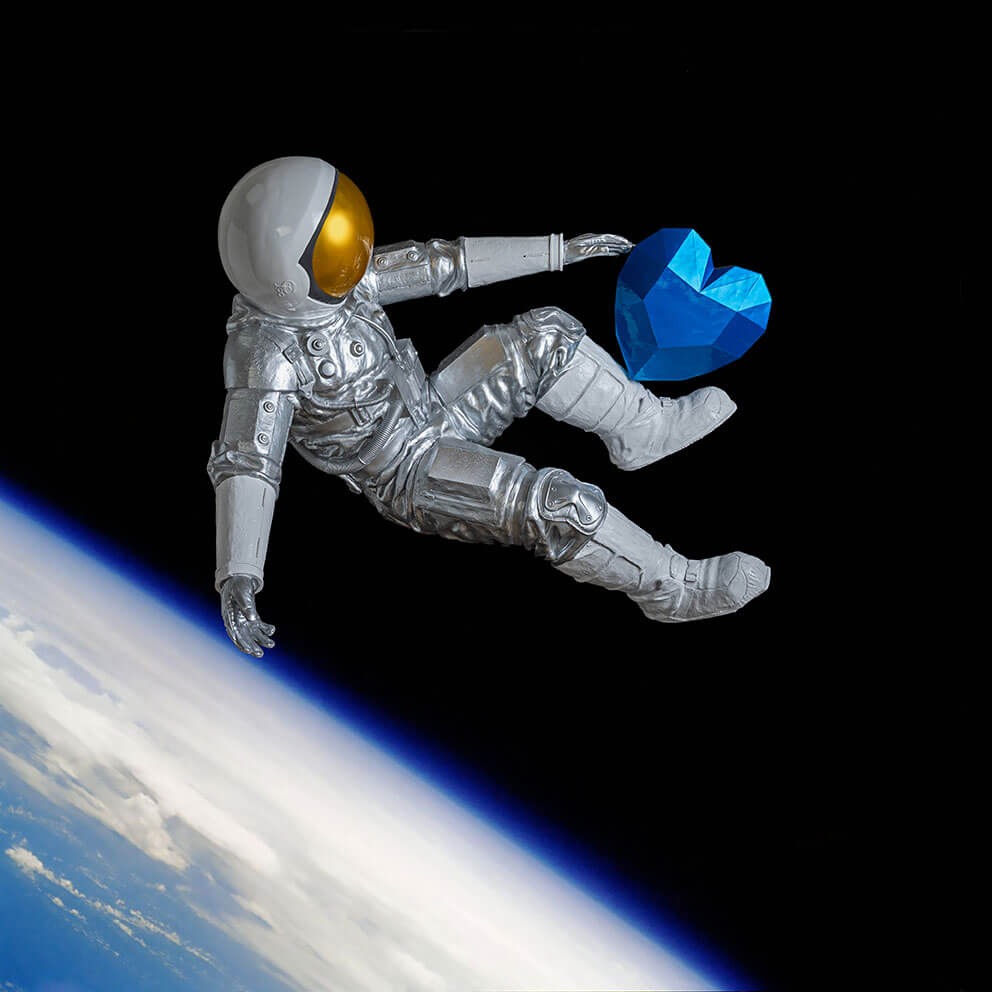